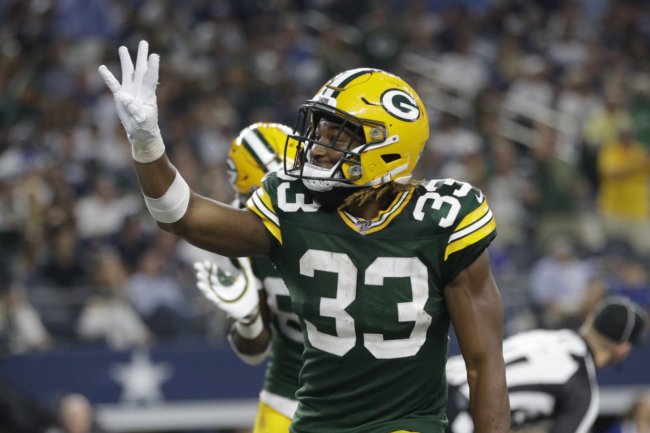 Aaron Jones re-signing with Green Bay is the most unexpected move of the young 2021, NFL offseason. Many, I included, anticipated Jones signing with the Jets, Dolphins or another club. Thankfully for Green Bay Packers fans, he did not.

Looking at the Packers’ running back depth chart, it appears to be the right move. With talk of Jones leaving and Jamaal Williams likely gone, the Packers would have been left with only A.J. Dillon and holes to fill through free agency and the draft. Dillon is inexperienced with little in-game action. Not likely what you want heading into a season where last year’s team missed the Super Bowl by one game, and touts the reigning NFL MVP.

Jamaal Williams is surely gone to free agency now, but that’s okay, as Dillon can fill his role quite easily, while the Pack depends on Jones to handle the starting role. It has been quite the free agency run for the Packers thus far, returning most starters. They will have their All-Pro offensive tackle, David Bakhtiari back healthy, and with Jones returning, the Packers should once again, be competitive.

It is now clear the moves Green bay made this week were designed with re-signing Aaron Jones in mind. When looking at the other available running backs, Jones clearly provides the most value, and this was not lost on the organization, signing him to a 4-year, $48 million contract. The market also was seemingly weaker than expected, which benefited the Packers. Signing Jones at $12 million a year is a steal, given Spotrac.com valued Jones at $14.6 million/year, just last week.

The next step – develop wide receiver talent through the draft or find a bargain in free agency. Can the Green Bay Packers continue this book-balancing act, and sign the likes of a Corey Davis, Will Fuller, or T.Y. Hilton? Time will tell.